If Your Boss Is Putting Your Life at Risk – Read This

When I think about what it takes to stand up to a boss I think about a manager I had eight years ago at a major charity who extended my probationary period three days before Christmas because I had taken too much time off sick.That my time off sick was a consequence of being hit by a car on my way to work, and of being sent home sick twice after having panic attacks when my manager bullied me in front of other people, was apparently not relevant.I have been thinking about this woman a lot over the past couple of days, alongside the scores of other spiteful, unpleasant and criminally negligent bosses I have encountered as a trade union representative and official.On Sunday evening, when Boris Johnson’s flagrant disregard for working-class lives led him to blithely announce that people who cannot work from home should be ‘actively encouraged’ to go back to work he revealed his absolute ignorance of what work is like for far too many people.

The idea that most people will be able to have what he referred to as ‘a reasonable conversation’ with their boss would be laughable if it weren’t so out of touch – but this is a consequence of electing a government and a Prime Minister who relate to employers as donors to be gently chatted up rather than bosses who need to be forced into respecting even the most basic entitlement to health, dignity and security in the workplace.

Limits of the Law

Eight years ago, I quit my job rather than confront the boss who bullied me. I have represented workers in hospitality, in publishing, in factories, in the entertainment industry and in social care who have done the same. They were fighting on their own for dignity and respect against bosses who did not care what the law said and who knew that justice can take months if not years to deliver. It isn’t an appealing prospect, no matter what your union rep might tell you.

Soon after Johnson’s announcement there were screenshots and Twitter threads alerting those expected to go back to work at 12 hours’ notice that they did not have to comply with demands from their bosses. Most referenced Section 44 of the Employment Rights Act 1996.

For those unfamiliar with the legislation, sections 44 and 100 of ERA ’96 provide employees (not limb (b) workers or the self-employed) with the right not to be dismissed or suffer detriment for refusing to work in circumstances where they reasonably believe that doing so would place them in serious and imminent danger. United Voices of the World have provided an excellent overview of the legislation on their website, outlining what it might mean for you, and there’s another good explainer on the TUC website.

No trade unionist is ever going to argue that knowing what rights you have is a bad thing, and nor would we argue that attempting to enforce those rights is somehow impossible or unrealistic. However, it is insufficient to simply tell frightened people with no prior knowledge of unions, the law or how to enforce their rights that they don’t have to go in if they don’t feel safe.

To do so ignores the fact that legal rights can still be disregarded by bad employers either through ignorance or more commonly through malice. Many take a calculated risk that a lone employee will not have the information, support or ability to fight their way through a complicated and often distressing legal system that was not designed with workers in mind.

In my rep training in the union, I was taught by a Wapping print striker. As a group of new and enthusiastic reps we asked him about the laws that existed to protect us at work – and he made us write down the following: “No working-class person can rely on the law. It was not made for you, it does not serve you and it does not look after you. It is for the boss and his friends to make your life harder and throw you scraps. All you have is each other.”

This isn’t to suggest that people who are frightened should suck it up, go to work and hope for the best, but it does mean that we have to consider where our power actually lies and how we can use that power to protect ourselves from work environments that could kill us. The right to refuse to return to work if you believe it is unsafe is an individual legal right – but for the exercising of that right not to result in being sacked or watching your hours wither away requires collective action.

Yes, you have the right not to be sacked or suffer detriment if you refuse to work because it’s not safe – but what’s your next move if you do this on your own and your boss sacks you? What are you going to do until your unfair dismissal employment tribunal that could be eight months or more into the future? To stop that happening you need your colleagues with you, and your union behind you. To put it another way, you need solidarity, and you need to start building that solidarity now.

How to Protect Yourself

Step one is joining a trade union – today – if you aren’t already a member. If you know your employer already recognises a trade union then join that one, but if you know there isn’t a union presence already in your workplace, join the one that is right for your industry. It’s very important to do this now rather than waiting until you get the call to return to work because you’ll need to start getting organised, quickly. Ask your friends who are in unions already or use the TUC’s union finder tool (but remember this only lists TUC affiliated unions).

Once you’ve joined a union, tell colleagues you know you can trust that you’ve done so and ask them to join too. Talk to people individually to start with, and once they’re signed up to the union you can set up a WhatsApp group or similar away from management and people who might tell management what you’re doing. Explain why you have joined and what your worries are around going back to work.

Then start talking to each other about what it would take for you to feel safe in your workplace. What additional safety measures do you want to be in place? How could social distancing work for you, or not? Will you need PPE? What about travelling to work – if you would need to use public transport at rush hour, what will that mean? Do you need changes to your shift patterns or hours? Have you got caring responsibilities and what impact will that have on your ability to go back work? What is your access to washing facilities like?

Read your contracts of employment and make sure you understand what the different clauses mean. Does the contract mention health and safety? Is there a handbook or policy you have access to that would cover this if the contract doesn’t? Read it, and find the part of the policy that covers how employees will be consulted on matters affecting their health and safety.

Once you’ve done this, contact the union you have joined if you’ve not already done so and tell them what you’ve done. They will help you finalise your plan of action and help you understand your rights both individually and as a group, so when the time comes to start negotiating with your employers about going back to work you have the confidence and the knowledge to do it.

Make sure you communicate with the employer about notice periods, plans and any other information you need – and do everything in writing so you have a record. Ask for copies of the risk assessments they’ve undertaken and use the brilliant guidance Unite the Union have produced to make sure you understand what the risk assessment should include and what it should look like. Insist on being consulted, not simply informed about what will happen.

You have rights, and you have power. Learn about both – exercise the latter to defend the former.

Confidently assert that you won’t work until it’s safe to do so and build the solidarity and organisation we all need to get us through this. Our lives depend on it.

If you are not yet a member of Unite

Can you afford not to be?

Unite is the largest trade union in the UK and Ireland with members across the private, public and voluntary sectors including manufacturing, public services, transport, food, finance and construction.  Even if you are not in work, there is a place for you in our community or retired member sections.

Have a voice, take action and make change happen.  Join the union today!

What you will need to join online today

Joining the union could not be easier.  Just follow our simple steps below.

Complete the simple form with your personal information and current job details, if applicable.

2. Find out the cost of your membership

The online application will work out your monthly membership fee based on the information you give us. *

3. Set up a direct debit

If you are happy with a monthly fee, you can complete the Direct Debit and activate your membership right away.

You’ll receive an email telling you how to gain access to the MyUnite portal.  A membership pack will follow in the post which will include your Unite membership number.

* The online application will calculate your joining fee prior to any payment being requested. 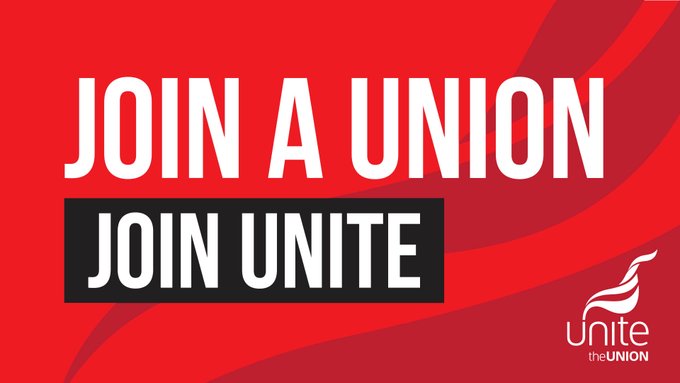 ← Coronavirus in Scotland: What is the magic (R) number?
Mental Health Awareness Week Monday 18 May – Sunday 24 May 2020 #Kindnessmatters →